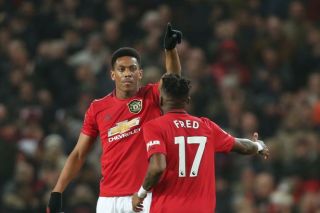 BBC Sport pundit Garth Crooks has conceded that he may have to ‘review my position’ on Man Utd forward Anthony Martial.

The 24-year-old has bagged 10 goals and three assists in 19 appearances for the Red Devils so far this season, and he has been key in the last two games to guide United to wins over Newcastle Utd and Burnley.

SEE MORE: Blow for Man Utd as key figure could be facing up to four weeks on sidelines

Question marks were perhaps raised over the summer with Ole Gunnar Solskjaer allowing Romelu Lukaku and Alexis Sanchez to leave, as it appeared as though he may well have left himself short up front.

However, he has opted to show faith in his youngsters and in Marcus Rashford and Anthony Martial to lead the way, and for the most part when the duo have been fully fit, they haven’t let him down.

Man Utd’s improved recent form has seen them climb back up to fifth place in the Premier League table after 20 games, as they now sit four points behind Chelsea in the battle for a top-four finish.

Martial’s influence will be key in the coming months to determine if they achieve their objectives or not, and now Crooks has admitted that the French international may be capable of proving him wrong after being left impressed over the last two games in particular having doubted his ability to lead the line.

“I think I saw Anthony Martial smile over the Christmas period,” he wrote in his BBC Sport column. “This lad only seems happy when he’s scoring goals.

“Against Newcastle he bagged two and his second was gorgeous. I was beginning to have my doubts that Martial was the right man to lead the line for Manchester United. However, I must admit the France international has handled both United’s festive fixtures with a certain authority.

“Watching the way he collected the ball from Andreas Pereira and slotted the pass into the Burnley net with such confidence, I may have to review my position.”

Martial was selected in the pundit’s Premier League team of the week to cap off an excellent few days, and it’s nice to see Crooks be honest and transparent with his views like this, enough to even admit that he may be wrong over his initial doubts.

Time will tell if Martial shows the consistency needed to actually prove that Crooks was wrong to doubt him in the first place though, as that is ultimately the key test for any forward as he must produce week in and week out for Man Utd moving forward.