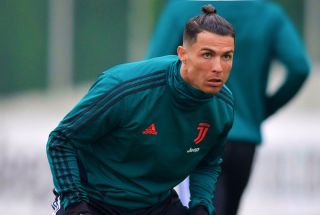 Cristiano Ronaldo is seemingly set to sport a new look for 2020, as the Juventus superstar showed off his new hairstyle in training this week.

As seen in the images below, he’s gone for the short trim on the back and sides but has left it long with a topknot as it’s not something we’ve seen from him before.

Clearly keen to freshen things up for the New Year, the Portuguese international will hope it brings him better luck on the pitch after a relatively disappointing season thus far for the reigning Serie A champions.

However, based on the tweets below, it’s fair to say that he hasn’t had the greatest of responses to the new look as many took to Twitter to brutally troll him.

Given what he’s achieved in his career on and off the pitch, quite frankly he can do whatever he wants as he’s got a happy life in football and at home with his family.

In turn, he probably feels confident to go with whatever look takes his fancy at the time. While he may regret this one in the future looking back, he’s committed to it now and if he starts banging in goals for Juventus again in January onwards, we may see it stick around for longer than many would like.