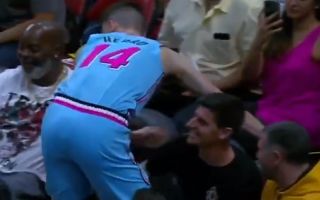 It’s become pretty clear how different the schedules in the Premier League and La Liga are around Christmas time.

While the Premier League clubs are training through Christmas day and preparing for a grueling schedule with the games coming one after the other, some of their European counterparts have been thoroughly enjoying themselves.

La Liga shuts down for a couple of weeks, so it looks like Thibaut Courtois decided to take in some NBA action during his time off, only he ended up getting called into duty unexpectedly:

Just Thibaut Courtois making a save at the @MiamiHEAT game ? pic.twitter.com/OC9pZYzTNE

Another world-class save from Courtois. pic.twitter.com/mAoejwOpwA

It’s remarkable when you see how close some of those seats are to the court, but it could’ve been a sore one for that player if the big keeper wasn’t there to catch him.