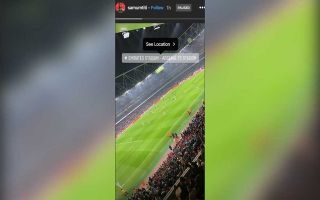 Barcelona star Samuel Umtiti has taken to Instagram to share with his followers that he’s in attendance for Arsenal’s mammoth Premier League clash with Manchester United at the Emirates this evening.

Umtiti let fans know that he was the game by uploading a picture from inside the Emirates Stadium to his Instagram story.

Whilst some Arsenal fans may get excited over Umtiti’s presence at the Emirates, it’s likely that the defender is just here to support friend Alexandre Lacazette, the pair were close during their time at Lyon.

Here’s a picture of the pair during the summer.

? — Samuel Umtiti was at the Emirates stadium to watch the Arsenal – United game today. pic.twitter.com/wHkRSSI5Lw

Arsenal may have to get Umtiti down to their games more often, his attendance seems to have sparked a controlling performance from the Gunners.