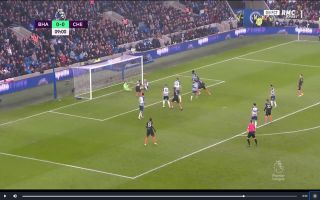 In the 8th minute of this afternoon’s Premier League clash between Chelsea and Brighton, the Blues took the lead following a corner.

Brazilian ace Willian whipped a dangerous corner into the box which was headed into Tammy Abraham’s path by Kurt Zouma.

Abraham’s effort on goal was cleared off the line by Aaron Mooy, but Azpilicueta was on hand to pounce on the loose ball and tap the ball into the back of the net from close range.

Take a look at the Spaniard’s opener for the Blues below:

Azpilicueta, one of Chelsea’s most loyal and reliable servants over the last ten years, has scored the Blues’ first goal of the new decade.