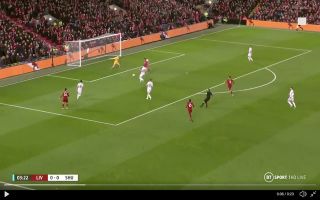 The Dutchman’s pinpoint pass flew into the path of left-back Andy Robertson, the Scotsman was left with plenty of time to pick a pass after Sheffield United’s George Baldock slipped.

Robertson played a perfectly-weighted low cross into Mo Salah’s path and the Liverpool forward slotted the ball into the back of the net to give the Reds the lead.

Take a look at the Egyptian superstar’s opener below:

The perfect start to 2020 for Liverpool!

Mohamed Salah puts the Reds 1-0 up inside just four minutes at Anfield ?

Baldock will be kicking himself after his costly slip, conceding such an early goal could be a massive blow to the Blades.