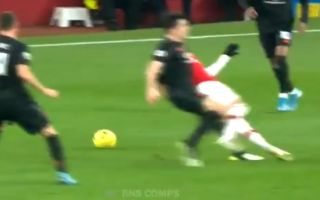 It’s probably important to try and be balanced about this in some way, it’s easy to sit at home and criticise someone from a distance, but sometimes a performance can just make you truly despair.

Just in case you weren’t aware of this before, Sky Sports reported that Man United paid Leicester a world record £80m to sign Harry Maguire in the Summer. He’s obviously a different type of player, but it was clear that they hoped he would have some kind of Virgil van Dijk effect on the defence.

This selection of highlights from his performance against Arsenal last night really does make you wonder how on earth United decided to pay so much for him:

Highlights of Harry Maguire’s performance vs Arsenal from soccer

You can see that he is trying to be brave and get on the ball and play out from the back, but it’s just hurting the team every time he gives the ball away in a dangerous area.

There are also times where you can see he’s just playing with a lack of confidence. He takes too long to decide when to get tight or close down, and it just makes it so easy for the opposition.

You have to think he’s un-dropable because of the price tag, but United really need him to be better than this.