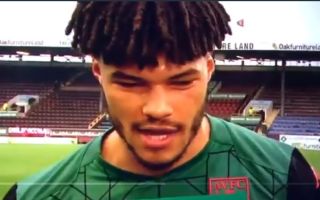 You can’t beat a bit of live coverage of football and we see so much of it these days, but there’s always the danger that the fans might start acting up and the microphones will pick up some choice language.

That was the case for Tyrone Mings here as he was interviewed following Aston Villa’s recent victory over Burnley. His response was fantastic, as he suggested the chants might be aimed at his teammate:

Tyrone Mings being interviewed standing next to Jack Grealish.

Mings to Grealish: “I think that’s for you, mate.” pic.twitter.com/AkQbiogqKF

To be fair to Jack Grealish, he had a perfectly good goal disallowed by VAR in the game but it’s easy to see why he might rub fans up the wrong way.

He’s immensely talented but seems exactly the type of player who’s loved by his own fans and hated by others. It would be a surprise if he wasn’t used to these kind of chants by now.