It’s likely that Ole Gunnar Solskjaer knew exactly what he was doing when he made these comments, but it was always going to attract some attention, especially with the transfer window being open.

He watched his side draw 0-0 with Wolves tonight, but it seems the lack of goals didn’t dampen his enthusiasm towards Wolves striker Raul Jimenez.

As reported by Birminghamlive, Solskjaer made the following comment about the Mexican striker: “Another good player that we’re being linked with”. BBC journalist Simon Stone also Tweeted about his comments, which included a bit more from the United boss:

OGS on Jimenez: “Another good player we have been linked with. He did really well today. I can’t comment on speculation.”

There’s nothing at this point to suggest a move to Old Trafford is close for him, but it’s interesting to see Solskjaer admit he played well and acknowledge the links.

He’s a different type of player to anything they have just now, and it’s easy to say he could make a positive difference. He’s relentless with his pressing and his pace and strength causes problems, while eight goals and six assists in the league this year isn’t bad either.

It could be a story worth keeping an eye on in the Summer. 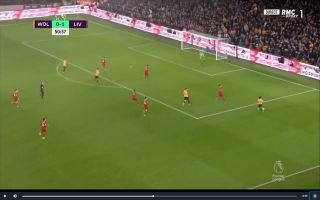