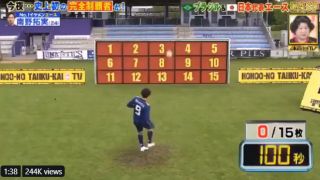 Liverpool new-boy Takumi Minamino smashed it with this brilliant volleying game on a Japanese TV show.

Watch below as the Reds attacker sets a new record by hitting all 15 targets, keeping his cool despite a time limit.

According to the Metro, the previous best attempted by someone at this game was 13 targets, but Minamino did well to show his technique and accuracy by hitting all of them.

The Japan international shone at Red Bull Salzburg before his January move to Anfield and could possibly make his debut for LFC against Everton in today’s FA Cup third round clash.