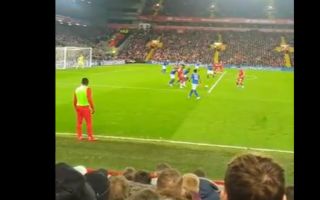 It really does look like Liverpool fans have no reasons to worry about anything in the near future when it comes to football. Everton have some serious issues to sort, as Liverpool’s youngsters were well worth their victory.

The game did feel like it would peter out into a 0-0 draw, but then Curtis Jones stepped up with an absolute wonder goal to win the game. The way the ball hits the bar and pings into the net is satisfying to watch.

This sight might be even more satisfying for the Liverpool fans, as a video has emerged that shows Sadio Mane’s reaction to the goal on the sideline:

Mané is all of us when that goal went in

Look at him on the touchline ? #LFCpic.twitter.com/VkKv8eFTWH

Not only is this team beating everyone, they have a clear togetherness and the youngsters are capable of performances like this too. It must be a great time to follow Liverpool right now.