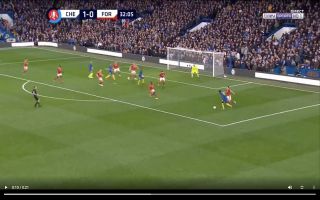 In the 32nd minute of this afternoon’s FA Cup tie between Chelsea and Nottingham Forest, tricky winger Callum Hudson-Odoi used some lovely skill to beat his man.

The Chelsea starlet then fired a shot on goal, that was parried away by the goalkeeper, the effort was spilled into the path of Ross Barkley and the midfielder tapped the ball into the back of the net.

Hudson-Odoi has been involved in both of Chelsea’s goals, the ace opened the scoring after cutting in from the wing.

Take a look at the England international’s goal below:

A goal this afternoon will be a massive boost to Barkley’s confidence, if he can start to get more goal contributions, Frank Lampard will have a real battle for midfield spots on his hands.