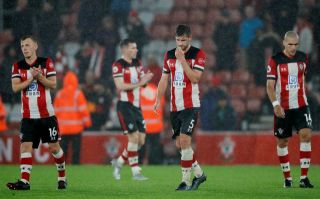 Southampton have posted an amusing little video of themselves muting some key phrases ahead of this weekend’s clash with Leicester City.

You’ll probably remember the Saints were absolutely humiliated by the Foxes the last time they met, with Brendan Rodgers’ side inflicting a 9-0 battering onto them in their Premier League clash at St Mary’s.

Just getting ready for the week ahead ? pic.twitter.com/afdOEMZidY

Southampton are now preparing to take on Leicester again at the weekend, and have poked a bit of fun at themselves by muting key phrases like ‘9-0’ and ‘hahaha nine’ on their Twitter.

We’re not sure this will stop the trolling coming in, but it’s a decent effort by Southampton, and hopefully they can do a little better on the pitch in this next clash too!