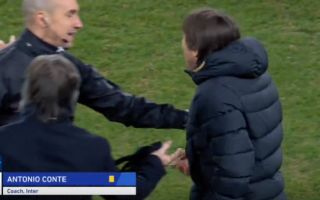 When you first see this clip it’s hard to see what all of the fuss is about. Fabian Ruiz does give the ball a decent whack towards the Inter Milan bench but the ball doesn’t leave the ground.

Then you realise that the dugouts are actually dug into the ground, so that ball is actually at head height for the Inter coaches and subs.

As expected, it all kicks off and Antonio Conte has to be restrained:

The Spanish midfielder might be lucky that it takes a bobble into the air as it arrives in the dugout, because the ref could’ve reacted more if it hit somebody in the face.

Incredibly it actually looks like Conte was booked while Fabian Ruiz escaped punishment. It seems that Rino Gattuso hasn’t managed to coax big performances from his Napoli players yet, but there’s a level of aggression that you would expect from his teams.