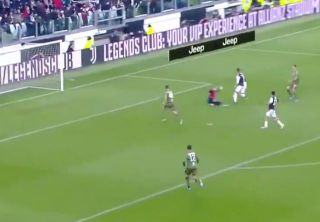 Cristiano Ronaldo is up and running for 2020 as he broke the deadlock for Juventus in their clash with Cagliari on Monday afternoon.

It’s been a slow season given the 34-year-old’s usual high standards, as he’s managed 12 goals and two assists in 21 appearances.

With Inter applying plenty of pressure in what is shaping up to be a thrilling Serie A title battle this season, Ronaldo’s form will be vital for Juventus as they look to defend their crown.

In turn, they’ll be delighted to see him waste no time in getting off the mark in 2020, and as seen in the video below, the Portuguese superstar showed his class in doing so.

Credit to him for initially applying pressure and pouncing on the mistake from the Cagliari backline, but Ronaldo then showed excellent composure and class to round the goalkeeper and slot the ball into the back of the net.

Time will tell if it leads to an all-important victory for the Bianconeri as he doubled his tally soon after, but it was certainly a decisive impact from Ronaldo to break the deadlock.

?? Ronaldo steals the ball off Walukiewicz's toe, and then rounds Olsen before applying the finish

? A nightmare moment for the Cagliari defence pic.twitter.com/AwAVsosbIr

Ronaldo has his first goal of 2020 ? pic.twitter.com/ggYRsN7l0H