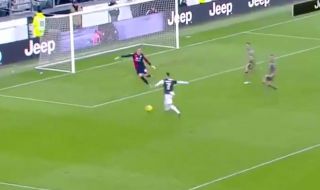 Juventus started 2020 in impressive fashion as they secured a 4-0 win over Cagliari in Turin on Monday with Cristiano Ronaldo leading the way.

A second-half hat-trick from the Portuguese superstar coupled with an effort from Gonzalo Higuain made the difference as the Bianconeri temporarily moved clear at the top of the Serie A table.

SEE MORE: Video: Cristiano Ronaldo pounces on error to show his class and give Juventus lead

In turn, it puts the pressure on title rivals Inter to respond when they face Napoli on Monday night, and they will be concerned about Ronaldo’s return to form in particular.

The 34-year-old hasn’t been at his best so far this season as he’d bagged 12 goals and two assists in 21 games before facing Cagliari.

Given his usual high standards, that is certainly a drop off compared to recent years, but he produced an emphatic response in the first game of 2020.

As seen in the video below, he raced onto a pass from Douglas Costa on the left side of the box and tucked his effort under the goalkeeper to find the back of the net for the third time in the game.

It was a top finish from the Juve talisman, and he’ll hope that now gives him the boost needed to score more regularly and lead the reigning Serie A champions to yet another Scudetto.

? Ronaldo has his HAT-TRICK!

? Straight from the tip-off after Higuain scored a third for Juve, Ronaldo adds another

??? A day to forget for Cagliari pic.twitter.com/3lUgmuOZsq

Ronaldo starts off his 2020 campaign in style. ? pic.twitter.com/usjshUeM5a