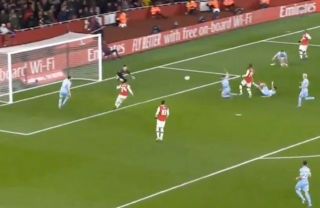 Arsenal struggled to get to grips with Leeds Utd in their FA Cup third round tie at the Emirates on Monday night, but they eventually found a breakthrough.

The visitors will have been pleased with how the opening 45 minutes went as they caused the Gunners problems and remained in the tie.

However, just 10 minutes after the restart, Reiss Nelson was on hand to break the deadlock, as seen in the video below, much to the relief of the home faithful.

There was some nice build-up play between Nicolas Pepe and Alexandre Lacazette before the ball fell kindly into Nelson’s path, and he made no mistake from close range to sweep the ball into the back of the net to give Arsenal the lead.

The north London giants know that a win would set up a trip to Bournemouth in the fourth round, and so they’ll be desperate to keep their hopes of winning a trophy alive this season.

Leeds will rue all their missed opportunities in the first half…