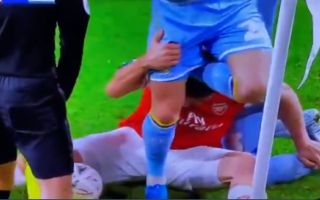 It’s hard to tell what the video shows about Arsenal defender Sokratis. On one hand it shows an incredible fight and desire to ensure his team keeps the ball, but it might also suggest that he’s slightly unhinged.

It was an incredible moment as he held off multiple Leeds players near the corner flag and finally won a throw. At one point he was sat on the ground with two players trying to kick and almost get a choke-hold on him, but it’s still not enough:

Sokratis is killing it ? pic.twitter.com/QNTi3ES23O

There was a scuffle that broke out afterwards and a VAR check that lasted a long time without any repercussions, but moments like these will only endear him to the Arsenal support even more.