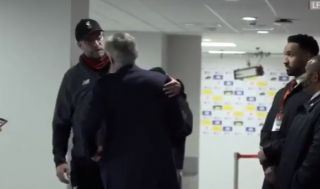 Everton manager Carlo Ancelotti waited for a chat with Liverpool boss Jurgen Klopp after their FA Cup clash at the weekend.

The Italian tactician seemed to want to congratulate the Reds manager, in a nice touch of class at the end of this Merseyside Derby.

Liverpool won 1-0 thanks to a wondergoal by youngster Curtis Jones in the second half, sending them through to the fourth round of the competition.

Ancelotti will have been hurting to lose his first derby match as Toffees boss, but showed his class to exchange some pleasantries with Klopp afterwards.