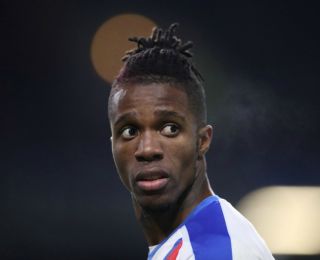 Crystal Palace winger Wilfried Zaha is reportedly adamant about leaving the club in January and Chelsea have been tipped as favourites to land him.

The 27-year-old has shown his quality again this season, but he perhaps hasn’t been as decisive as usual with just three goals and three assists in 22 appearances.

Speculation remains rife over his future, and now The Sun have reported via Sky Sport News that he is intent on getting a move this month with Chelsea touted as favourites to beat Bayern Munich to his signature.

The Blues are back in the transfer market after their ban was reduced last year, and so Frank Lampard will be able to bring in reinforcements in January.

Zaha could seemingly now be on their radar, although they’ll have to splash out a hefty figure as it’s claimed that Palace want £80m for their star man.

That would make him Chelsea’s record signing if they were willing to pay that fee, but that seems a highly inflated valuation and so it remains to be seen if it’s enough to put them off and to look elsewhere.

With ageing stalwarts such as Pedro, Willian and Olivier Giroud still in the squad, Lampard will perhaps be aware of the need to continue to build with a long-term plan in mind having seen many of his youngsters impress this season.

Zaha still has his peak years ahead of him and boasts experience at the top level for both club and country, and so he could be a sensible addition to the Chelsea squad if an agreement can be reached on his transfer fee with Palace continuing to face a battle to keep him at Selhurst Park.