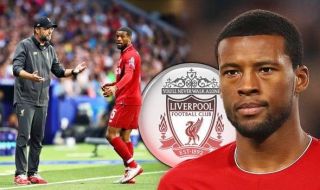 Liverpool midfielder Georginio Wijnaldum is reportedly ‘very happy’ at the club and wants to commit his long-term future to the Reds.

The Express had suggested that the Merseyside giants could be open to allowing the Dutchman to leave as he has 18 months remaining on his current contract, and there was said to be doubts over whether or not he would extend his stay.

However, according to Sky Sports reporter Kaveh Solhekol, as per his tweet below, he has rebuffed that claim entirely and insisted that Wijnaldum is settled and eager to sign a new deal with Liverpool to extend his stay at Anfield beyond his current deal.

Time will tell if the two parties reach an agreement and make an official announcement, although given the length of his current contract, it doesn’t necessarily need to be a major priority at this point.

It will perhaps come as a huge boost for Liverpool though that there is a desire on the player’s part on wanting to stay according to Solhekol, as he has been a key figure in Jurgen Klopp’s successful side as they continue to pursue major trophies this season.

That will no doubt be the priority for all concerned in the coming months, and so perhaps Wijnaldum will get a chance to sit down with the club at the end of the season to discuss his future, rather than allow it to become a distraction at such a crucial stage of the campaign.

Georginio Wijnaldum is very happy at Liverpool. Would like to stay as long as possible. No panic about contract running out in 18 months. Plans in the pipeline about talks over new deal. Fully focused on helping Liverpool win the title. Believes he's at best club in the world