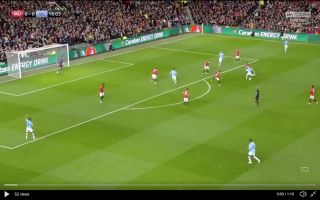 In the 16th minute of this evening’s mammoth Carabao Cup semi-final first-leg between Manchester City and Man United, Bernardo Silva produced this moment of magic.

After picking up the ball from Kyle Walker, City star Bernardo Silva charged towards goal and punished United’s defence for giving him space by firing the ball into the top corner.

David de Gea had no chance of stopping this wonderful strike.

Take a look at the Portuguese star’s stunning strike below:

A STUNNER FROM SILVA ?

Manchester City lead against Manchester United in the first leg of their Carabao Cup semi-final.

See More: Some Manchester United fans apparently cheered after Lingard was subbed off.

What a hit from the City midfielder.