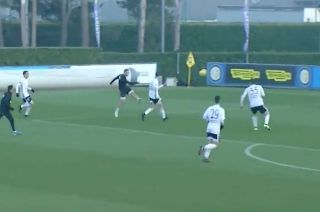 Inter played a friendly as part of their training schedule this week and it served up an absolute treat from Federico Dimarco who scored a stunning goal.

For the Nerazzurri, it was an opportunity for some of their players to stay sharp and to build their fitness ahead of their clash with Atalanta this weekend.

It’s been an impressive season so far for Antonio Conte’s men as although they crashed out of the Champions League, they look set to push Juventus all the way in the Serie A title battle.

One man who is clearly keen to play a bigger role is Dimarco, with the 22-year-old limited to just 19 minutes of playing time in Serie A so far this season.

However, he certainly did his best to catch Conte’s attention on Tuesday as he produced an absolute rocket of a volley during the training match as seen in the video below.

The technique, power and accuracy involved make this a gem of a goal, and it’s one that has since gone viral due to its quality. Well played Federico, skip to the 2.10 mark on the video to find his strike…