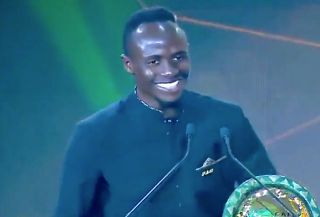 It was a memorable night for Sadio Mane on Tuesday as the Liverpool and Senegal star was named the African Player of the Year for his efforts in 2019.

The 27-year-old looked absolutely delighted as he accepted his award, as seen in the video below, as he simply couldn’t wipe the smile from his face.

After scoring 30 goals in all competitions last season and leading Liverpool to the Champions League, he enjoyed a superb campaign and has continued that form this season to lead the charge for more major honours.

Always one to show his class and humility, Mane had several goes at thanking everyone that he wanted to give a mention to, including Liverpool and his compatriots who have supported him throughout his career with a special mention for his village where his dream began.

It was a special moment for Mane, and he’ll no doubt hope to add plenty more trophies and individual awards to his collection in the coming years as Liverpool continue to look like a dominant force both in the Premier League and in Europe.

For now, you just can’t help but smile watching him nervously accept his award, and based on the comments on social media, Liverpool fans are absolutely loving it…

? | Congratulations to Sadio Mané on wininng the African Footballer of the Year Award . Well deserved. ?pic.twitter.com/oB5gNbFzCV