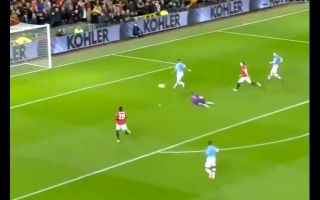 Man City were in fine form on Tuesday night as they took on rivals Man Utd in the first leg of their Carabao Cup semi-final clash at Old Trafford.

Bernardo Silva had given the visitors the lead with a stunning strike to get things started, and it wasn’t long before they had doubled their lead.

The Portuguese ace was at the heart of it again as he slid in a brilliant assist to find Riyad Mahrez running in behind the United defence, as seen in the video below, and he made no mistake as he cooly slotted the ball into the back of the net after rounding David De Gea.

Things got even worse for the hosts soon after as an Andreas Pereira own goal saw Man City go 3-0 up before half-time, and so it’s fair to say that Ole Gunnar Solskjaer’s side have it all to do if they are to turn it around and have any chance of making it to the final.

With the way in which City were playing and looking so comfortable and dangerous, it’s hard to see them not adding to their advantage after the break unless Solskjaer can drastically change things.