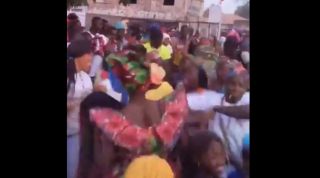 There were reportedly joyous scenes in the hometown of Liverpool star Sadio Mane as he won the African Player of the Year award.

The Senegal international, originally from a tiny village called Bambaly, had a superb 2019 and looks a deserving winner of the prize after his scintillating performances for Liverpool.

The scenes in Sadio Mane’s tiny village of Bambaly in Senegal after he was named the CAF African Player of the Year ???

He’s helped fund a hospital, a school and a stadium there and regularly provides money and clothes for local families pic.twitter.com/edMWyIrIDj

And just look what it means in his hometown, as the Metro show the party atmosphere in the video above in response to Mane’s victory.

As well as his fine form on the pitch, the 27-year-old is seemingly a class act off it as the Metro claim in their tweet that he’s done huge amounts to help fund hospitals and other projects in Bambaly.