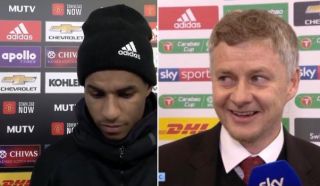 One Manchester United fan was clearly not impressed with Ole Gunnar Solskjaer’s response to the Manchester City defeat.

See below as Twitter user MUFC_Aman7 posts two pictures – one of Solskjaer with a beaming smile, and one of United striker Marcus Rashford looking distraught after the 3-1 home defeat.

The result gives the Red Devils only the slimmest chance of making it into the Carabao Cup final, and it seems Solskjaer’s response to the result was not seen as good enough.

Of course, it’s easy to slam the Norwegian tactician or indeed anyone for one frozen still image from what was presumably a long interview, but Man Utd fans are clearly angry with how things have gone for their club in recent times.