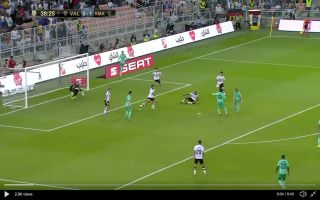 In the 38th minute of this evening’s Spanish Super Cup semi-final between Real Madrid and Valencia, Fede Valverde was played in on the right flank and picked out Luka Modric with a low cross into the box.

Modric’s effort to hit the back of the net was blocked but Isco showed his amazing ability to chest the ball before drilling a volley into the bottom corner.

Take a look at the attacking midfielder’s strike below:

He fires into the bottom corner to double the lead in the Spanish Supercopa semifinal! pic.twitter.com/qQGVMtF0xP

Isco took this goal like it was a training ground exercise ?

After struggling with injuries and falling out of the team over the last couple of years, can Isco get back to his best this season?