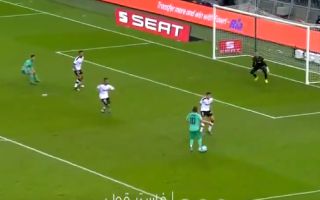 It does look like the decision to revamp the Spanish Super-Cup was one of the worst examples of a money grab from an FA in recent years.

They expanded it to four teams and moved the tournament to Saudi Arabia. Judging by the footage it looks like a lot of fans decided to give it a miss, while it’s not clear if the Valencia team have shown up either.

It’s been a breeze for Real Madrid so far, and this goal from Luka Modric has effectively finished the game:

Luka Modric is a magician pic.twitter.com/Gj3qhQFVfg

Luka Modri? scores with the outside of his foot.

He makes it looks so easy ? pic.twitter.com/ir1zHPNbsi

Jovic with the assist and that finish from modric ??pic.twitter.com/ZETh0Gfvv1

It looks like he took too long to make his mind up, but he shows great composure to stick it in the far corner with the outside of his boot.

The Valencia defending is about as absent as the fans, but you have to give credit to Modric for the finish.