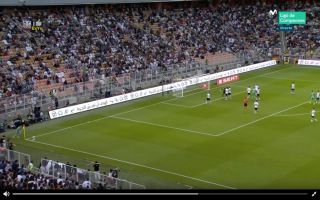 Real Madrid have taken an early lead in tonight’s Spanish Super Cup semi-final against Valencia thanks to a moment of magic from Toni Kroos.

Los Blancos were awarded a corner and Kroos capitalised on Valencia stopper Jaume Doménech being outside of the six-yard box to whip a corner directly into the back of the net.

Doménech scramble back to his goal but was too late to keep the German star’s quick-thinking effort out of his goal.

Take a look at Real Madrid’s opener below:

We don’t get to see goals like this very often, hats off to Kroos.