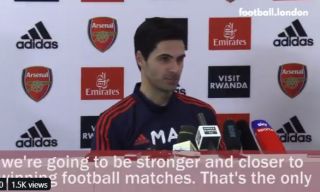 Arsenal manager Mikel Arteta has given an encouraging update on the transfer situation regarding star striker Pierre-Emerick Aubameyang.

A recent report from the Independent suggested it could be hard for the Gunners to persuade the Gabon international to stay at the Emirates Stadium after their struggles this season.

"My intention is to keep Auba obviously, because I know that if we keep Auba with us we're going to be closer to winning football matches."

However, Arteta has now responded to claims from Aubameyang himself which seem to clarify his feelings, and the Spaniard seems to be relieved.

Speaking in the video above, the new AFC manager makes it clear he has no intention of selling the 30-year-old as he’s such an important part of his side.

That’s what Arsenal fans will want to hear after so much doom and gloom in recent months.