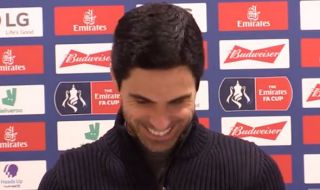 You may remember earlier this week a phone with an Everton ringtone went off during Arteta’s post-match press conference.

See below for a full explanation about the incident from Darren Willerton, a member of staff at Arsenal and an Evertonian…

Very embarrassing moment. I am one of Mikel Arteta close protection operators. My phone was not on loud on purpose nor a stunt but because my little boy was very unwell. I apologised to Mikel Arteta who told me he thought it was brilliant and that he loved Everton and their fans pic.twitter.com/jdknIzzRLE

Willerton explains why his phone went off as his son has been unwell, and also revealed that he had a nice chat with Arteta later.

Supposedly, the Spaniard still has strong feelings for Everton – the club he played for for six years before his 2011 transfer to Arsenal.

Now back at the Emirates Stadium as manager, it seems nothing can undo Arteta’s love for the Merseysiders!