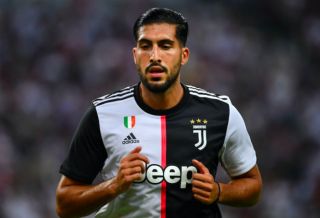 Emre Can has delivered on a promise to a Juventus fan after accidentally hitting her with a stray pass/shot during a warm-up session last month.

The incident occurred at some point during the 2-2 draw between Juventus and Sassuolo on December 1, with the fan seen below tweeting the German international about the damage done.

In a wonderful show of class, Can apologised and proposed sending a jersey to the supporter as a way of saying sorry. Naturally, it was a gesture that was accepted, and so it was a case of waiting to see if he followed through with his promise.

As seen below, said jersey is now in the hands of Rossella Borneo, and it appears as though everyone is now happy after the mishap last year.

It’s a great gesture from Can, and we take our hats off to him as he could easily have ignored the tweet or dismissed it. Instead, he’s made this Juventus fan pretty happy by the looks of it and it’s the kind of thing you love to see…