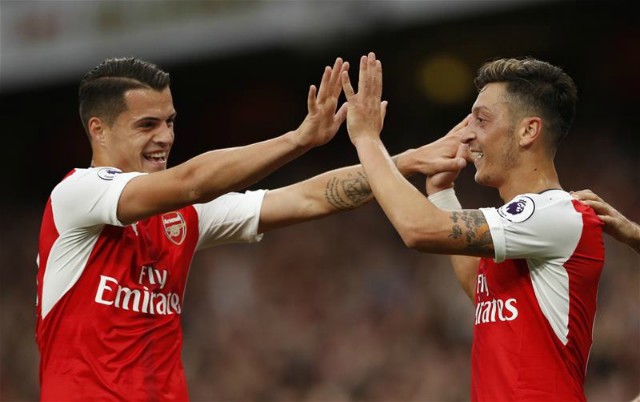 Arsenal manager Mikel Arteta has said that he convinced Granit Xhaka to stay at the club.

The Swiss international received plenty of criticism from the Gunners fans for his performances during the first few months of the season. Things went from bad to worse for Xhaka after a little tirade with the fans during Arsenal’s match against Crystal Palace.

This incident saw the 27-year-old being stripped off the club’s captaincy and he didn’t feature in their next few matches. However, Xhaka is back in the first team and has started in two out of the three matches under Arteta.

The Swiss midfielder has been linked to Hertha Berlin recently with his agent Jose Noguera even claiming that terms were agreed with the Bundesliga side.

However, Arteta said that he has convinced Xhaka to stay in North London. As quoted by Sky Sports, the Arsenal manager said: “The first message for him was that I wanted to understand how he was feeling, why he was feeling that way. I wanted him to hear from me my opinion on him, and that I was ready to support him and that I was ready to push the club to be supportive of him too, because I thought he could be a really, really good player for us and he could enjoy playing under me in this football club.

I tried to convince him that way. He thought about it, he had a very positive response afterwards, and I think he changed his mind.”

Xhaka has made 18 appearances for Arsenal this season so far with an assist against Crystal Palace. His performances under Arteta have been fairly good and judging by the Spaniard’s comments, he clearly wants the Swiss midfielder to stay and is willing to give him ample first-team opportunities.

Arsenal’s next match is against Crystal Palace tomorrow at Selhurst Park and there’s a fair chance of Xhaka starting against Roy Hodgson’s side.