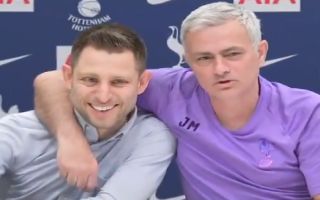 We’ve seen enough of Jose Mourinho over the years to know that his press conferences can be unpredictable, this one was funny but also incredibly uneasy at the same time.

In a weird way he comes across as far more sinister when he’s happy and joking. When he’s furious and finding excuses then everyone’s used to that, but the jovial mood is a difficult one to figure out.

He was discussing the possibility of Spurs defeating Liverpool tomorrow, and even uses a terrified club employee as part of his act:

Jose Mourinho says only two people at Friday’s press conference expect Tottenham to upset Liverpool – himself and the club’s head of communications. ?

Jose Mourinho was in fine form during his press conference ahead of Liverpool pic.twitter.com/nyvQeYSn5o

Spurs are at home but they go into the game without Harry Kane and face a Liverpool team yet to lose this season. Historically this seems like the kind of game where Mourinho would produce a defensive masterclass and come away with a win, but even he knows that very few people think his team can do it.