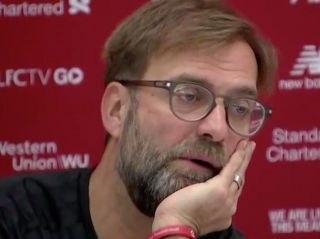 Jurgen Klopp is fully focused on Liverpool’s clash with Tottenham this weekend, and he clearly has no time for possible records that could come with it.

The Merseyside giants are 13 points clear at the top of the Premier League table with a game in hand, as they have continued what has been a relentless march towards the title so far this season.

They’ll hope to continue that against Spurs on Saturday, and clearly nothing is distracting Klopp from getting three points even it involves setting impressive records.

As seen in the video below, the Liverpool boss was asked about his thoughts on it as Liverpool continue to rack up the points, but he was clearly in no real mood to even think about it as he questioned who asked the reporter to come up with such a query.

It’s a fair point from Klopp as things like that surely don’t mean that much to him with the bigger picture in mind. That said, it would be an impressive achievement and so the reporter has his own right to bring it up if he believes it’s an interesting avenue to go down.

Based on this response though, it’s fair to say Liverpool have other things on their minds but to his credit, Klopp did go on to explain why he had no interest in the potential record…