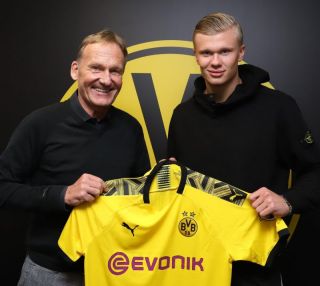 Norwegian striker Erling Haaland said that he joined Borussia Dortmund because he thinks the Bundesliga will be suitable for him.

The 19-year-old made quite a name for himself thanks to his performances for Red Bull Salzburg earlier during the season. In 22 appearances for the Austrian club in 2019/20, Haaland amassed 28 goals and seven assists. He joined Borussia Dortmund some days back after the club met his release clause of €20 million according to BBC.

Before joining the Bundesliga giants, Haaland was also linked to Manchester United with the Daily Mail claiming some weeks back that the Norwegian was flying to the city for transfer talks.

When asked why he chose Borussia Dortmund ahead of the Red Devils, the 19-year-old striker said as quoted by Goal.com: “I chose Dortmund because my feeling was best here. It’s a massive club. I’ve always liked this club. When I mention it, I start to smile because I like the club and how it is, so that’s why. I like everything [the fans, the style of play], all of it. “[The Bundesliga] is a good league with a lot of good players. It’s a great league, the teams play nice football and I think it’ll fit me.”

Choosing Dortmund might be the right choice by Haaland because there’s a good chance of him getting more game time here than at Man United. Lucien Favre’s side play a Bundesiga fixture against Mainz this weekend and there’s a chance of the Norwegian striker playing his first official match for the club.