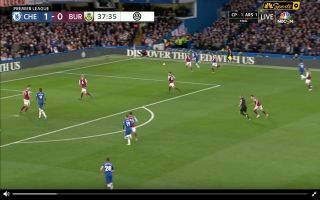 In the 37th minute of this afternoon’s clash between Chelsea and Burnley, Reece James picked up the ball deep on the right flank after a clever one-two with tricky winger Callum Hudson-Odoi.

The 20-year-old somehow managed to squeeze a pinpoint cross into the box, despite the ball being inches away from running out of play.

The ball floated into the box and Tammy Abraham rose highest to head the ball towards goal. The forward’s effort hit the back of the net after an apparent mix-up between Nick Pope and Ben Mee.

Midfield maestro Jorginho opened the scoring for the Blues just over 10 minutes before with an ice-cold penalty.

Take a look at the 22-year-old’s header below:

Abraham now has 13 goals in the Premier League this season, only Leicester talisman Jamie Vardy has more than the Chelsea sensation.