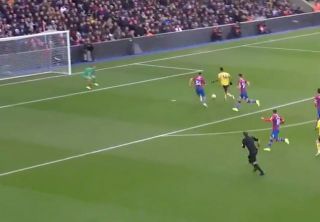 Arsenal took just 12 minutes to find a way through Crystal Palace on Saturday, with a brilliantly-worked goal breaking the deadlock at Selhurst Park.

The Gunners were looking for their third consecutive win across all competitions this weekend, with Mikel Arteta naming an unchanged side from their last Premier League outing.

It appears as though that consistency and settled line-up could be paying dividends, as Arsenal wasted little time in finding a breakthrough against Palace.

As seen in the video below, it involved some brilliant and patient build-up play before a superb assist from Alexandre Lacazette found Pierre-Emerick Aubameyang breaking in behind the Palace defence.

After taking a perfect first touch to control the ball, he made no mistake with his finish as he comfortably curled his effort into the back of the net to give Arsenal an ideal start in what is no doubt a tricky place to go and pick up a positive result.

Arsenal take an early lead at Palace after some beautiful link-up play ?

His 16th goal of the season! ? pic.twitter.com/YEcQhB5iYi

Arsenal's captain fantastic does it again ?

Alexandre Lacazette links up with Pierre-Emerick Aubameyang for the opener at Selhurst Park.#CRYARS #PremierLeague #OptusSport pic.twitter.com/lu5qbcSrzR