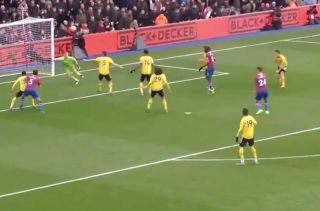 Arsenal were impressive in the first half of their clash with Crystal Palace on Saturday, but it wasn’t long before they conceded in the second half.

Pierre-Emerick Aubameyang had given the Gunners the lead after just 12 minutes, as they looked to make it three wins on the bounce to continue to build some momentum.

In turn, it was an ideal start at a tricky place to go and secure a positive result, and Mikel Arteta would have been hoping that it would give the platform to go on and seal all three points.

That looks like it will be easier said than done with Jordan Ayew drawing Palace level after the break, and as seen in the video below, he owes a huge debt of gratitude to David Luiz as his effort took a big deflection off the Brazilian stalwart to send the ball up and over Bernd Leno.

The Arsenal goalkeeper had no chance of keeping it out at that point, and so it will be a real test of the visitors now to see whether or not they can respond and restore their lead to come away from Selhurst Park with a much-needed win.

A huge slice of fortune for the Eagles but they don't care ? pic.twitter.com/PyLRaIuYoO

Arsenal can only watch on as Jordan Ayew's strike floats into the net for the leveller.