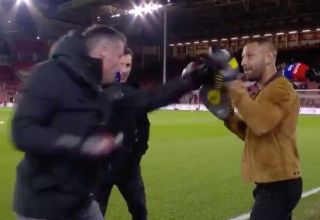 Jamie Carragher swapped football for boxing for a few minutes on Friday Night Football this week with special guest Kell Brook dropping in.

The Sheffield United fan spoke to the Sky Sports team before the Blades picked up a 1-0 win over West Ham at Bramall Lane, and he even donned the pads to give Carragher a quick work out.

Gary Neville watched on as he opted to sit out, only to be left impressed with his colleague’s skills with the boxing gloves as to his credit, Carragher looked pretty sharp to leave Brook surprised too.

As he swapped left hooks for uppercuts, the Liverpool legend screamed out that he might even send Brook flying into the Kop such was the energy and accuracy behind his punching, with promoter Eddie Hearn mentioned on Twitter by both men with a possible bout in the works in the future.

All were left in stitches as Carragher really got into it but clearly Brook was delighted to get involved and promote his own fight next month as he looks to become a two-time world champion this year.

? on FNF with Kell Brook! @EddieHearn ?