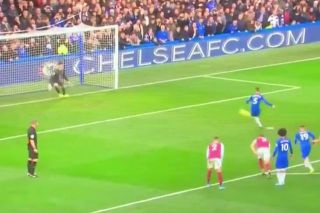 Chelsea broke the deadlock against Burnley in their clash at Stamford Bridge on Saturday as Jorginho once again made no mistake from the penalty spot.

The Blues have won just two of their last five Premier League games and so as they continue to try and keep hold of fourth spot in the table, Frank Lampard would have been desperate for three points this weekend.

As seen in the video below, Jorginho ensured that they took the lead against Sean Dyche’s men with another of his trademark penalties, as he made no mistake and sent the goalkeeper the wrong way to make it look all too easy.

Tammy Abraham doubled Chelsea’s lead soon after and so it would appear as though they are on course to secure an important win, but they’ll no doubt be guarded against complacency by Lampard, especially with rivals Man Utd also leading at the time of writing as they try to chase down the Blues from fifth spot.

As for Jorginho though, that’s the 28-year-old’s sixth goal of the season, as he continues to play a key role for Chelsea.

Jorginho is GOOD at penalties ? pic.twitter.com/MJyETjQ98I