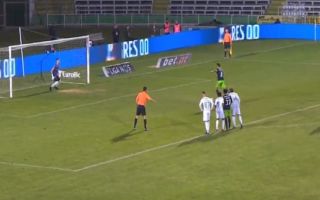 It started to feel like Bruno Fernandes would be a Manchester United player before long, but he’s still playing for Sporting CP and he’s made another decisive contribution tonight.

A report from Sky Sports yesterday indicated that a move to Man United was close, but this might suggest otherwise.

He put Sporting 2-0 up tonight after he won a penalty and converted it in a classy if somewhat unorthodox manner:

The small jump before striking the ball seems to have a high success rate but he would look foolish if he missed.

Time will tell if this is a farewell or not, but United fans will be hoping he does make the move to Old Trafford sooner rather than later.