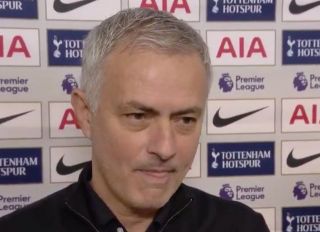 Jose Mourinho didn’t beat around the bush when explaining his decision to start Tottenham youngster Japhet Tanganga vs Liverpool on Saturday.

The odds are undoubtedly stacked against Spurs against the current Premier League leaders, who have been on a relentless march towards the title this season.

SEE MORE: ‘Let’s roll them over’ – These Liverpool fans on ‘perfect’ lineup against Spurs

While Tottenham have their own ambitions of securing a top-four finish this year, they’re without the likes of Moussa Sissoko and Harry Kane after they sustained injury setbacks this past week.

In turn, they’ve had to look at alternative options in the XI, and that has opened the door for Tanganga to get the nod against the Merseyside giants.

It will be a daunting task for the 20-year-old, but when asked what made him select the Spurs starlet, Mourinho gave a pretty simple answer. He’s fast.

That will come in handy against the Liverpool front three, but time will tell if his inexperience becomes a problem…