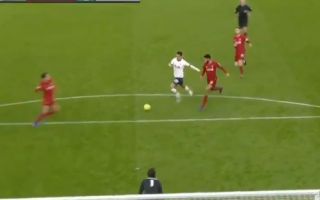 He’s well known for being impossible to get past while also being fantastic on the ball, but his powers of recovery are pretty incredible too.

It looks like Spurs have a great chance to score here, only the Dutchman appears from nowhere with a perfect tackle to kill the attack:

Van Dijk with a clutch tackle to stop Dele Alli. Best defender in the world for a reason. pic.twitter.com/hvKh14ommN

Admittedly it’s a poor touch from the Tottenham man that gives him a chance, but defending like this will only help to build his aura and make opponents scared to face him.