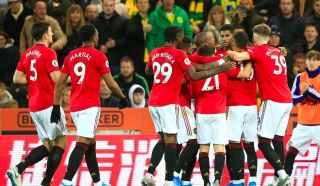 Manchester United are being linked with a potential transfer swoop for Boca Juniors wonderkid Agustin Almendra.

AS Argentina claim the Red Devils are interested in signing Almendra this January, with the 19-year-old among the players on their list of targets.

United have been linked with a host of other big names this winter, with Bruno Fernandes perhaps looking the most likely midfield player to come in.

This follows Man Utd supposedly cooling their interest in the likes of Emre Can and Sean Longstaff, but it seems Almendra could still be an option.

Inter Miami are also chasing the Argentine teenager, so he could wind up being an exciting early signing for David Beckham’s MLS franchise club.

Still, it would be intriguing to see this promising talent in the Premier League and MUFC will be hoping they can remain in the running for his signature.

As of yet, however, United haven’t made an official approach for Almendra, so it may be that they’re waiting to see how things work out with Fernandes.

The Portugal international was, however, also linked strongly with a move to Old Trafford during the summer, so there’s every chance the club will still have to explore other options if this deal falls through once again.