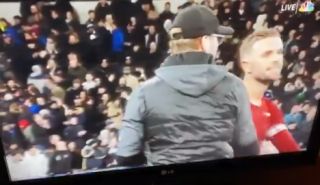 Liverpool captain Jordan Henderson clearly has high standards as he did not look happy after Saturday’s 1-0 win over Tottenham.

The Reds went 16 points clear at the top of the table, making not only the best ever start to a Premier League season but also the strongest start of any team ever in Europe’s top five leagues.

Still, as you can see in the video below, Henderson did not look satisfied with how his team played, admitting to manager Jurgen Klopp that the performance was “s**t” and not good enough…

Jordan Henderson after the game: “It’s not good enough. It was shit.”

This is a team that has 61 points out of 63 and sits 16 points clear atop the Premier League yet they still expect more.

The mentality installed in this team is something else.

This is surely the sign of true winning mentality, with Liverpool absolutely not letting standards drop even the slightest bit.

It also shows there’s no danger of complacency at Anfield as LFC look like strolling to the title this year.

Still, Henderson can surely afford to chill out at least a little bit – they weren’t *that* bad and picked up three points away to a top team!