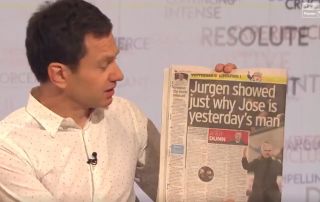 Jose Mourinho’s tactics have been torn to shreds by the Mirror’s Andy Dunn on Sunday Supplement.

Watch below as Dunn explains his criticism of Mourinho, whose Tottenham side put in a poor performance against Liverpool in their Premier League defeat on Saturday.

Have #THFC improved under Jose Mourinho? ?

Compared with Reds boss Jurgen Klopp, Mourinho really does seem increasingly behind the times and Spurs must be starting to wonder if they made the right choice in hiring him.

The Portuguese tactician has built his career on strong defensive performances, but his tactics have looked out of date for a few years now after poor recent spells in charge of Manchester United and Chelsea.