Former Tottenham star Dimitar Berbatov angered a member of staff at his old club this weekend in a bizarre incident.

The Bulgarian, who played for both Spurs and Manchester United in his career in the Premier League, has not always been much-loved by fans of the north London giants for the nature of his move from White Hart Lane to Old Trafford in 2008.

And once again, Berbatov will no doubt have angered some Tottenham fans with his alleged behaviour before the Liverpool game on Saturday.

See below for the account from football.london reporter Alasdair Gold, who says Berbatov came in and helped himself to a bread roll without permission.

And despite anger from one member of the club’s catering team, Berbatov carried on eating it with it hanging out of his mouth before simply leaving the room… 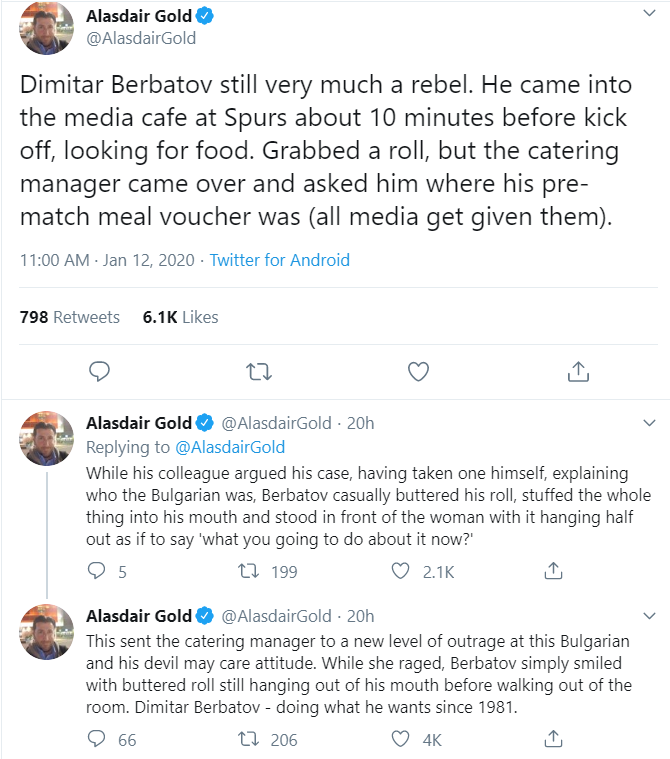 Berbatov truly is one of the game’s big characters, and Man Utd fans will no doubt find it amusing seeing him troll his old club Spurs here.

The 38-year-old only recently retired from playing and now does occasional punditry work.

Clearly, he’s also a fan of bread rolls, so don’t try taking one off him…