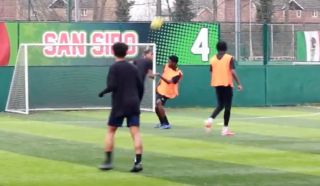 Watch below as the 15-year-old performs a series of hugely impressive skills, with his quick feet and natural flair there for all to see.

One of many exciting youngsters featured on the YouTube channel of FFD.TV Online, Bynoe-Gittens even dazzles an opponent with a rainbow flick at around the 1.25 minute mark…

FFD.TV have also tracked the progress of other wonderkids down the years, such as Jadon Sancho, Reiss Nelson and Callum Hudson-Odoi before they made it big.

Could Bynoe-Gittens be the next big talent to keep an eye on? He certainly seems to have the raw ingredients to make it big!